The Financial Menage a Trois 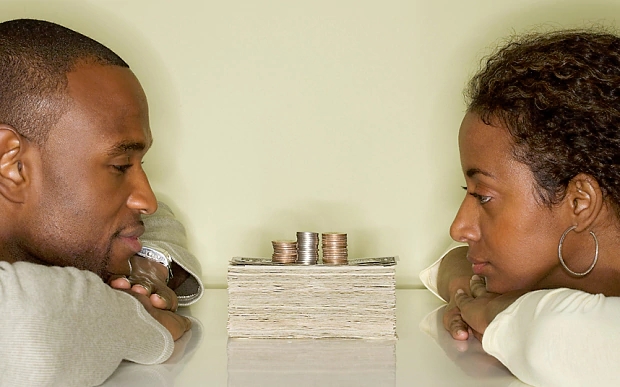 (The following is an excerpt from the book Joker to King.)

Back when I taught middle school and high school, I would sometimes (not often, but every once in a while) answer students’ questions about sex and relationships. I would tell students that if they can’t talk about sex, then they’re not ready for sex. Period. If you are filled with nervous anxiety about sitting down with your partner and having an adult conversation, then you’re not ready to engage in adult behavior.

The exact same thing is true for money. If you’re not adult enough to share discussions about money, then you’re not ready to share actual money.

When two people enter into a long-term committed relationship, they’re sharing more than their time, bodies, and thoughts with each other. They also begin to share their finances. And once a couple decides to spend their lives together in marriage, not only do they share their money, but they also share their debts. All of this money-sharing and debt-sharing can (and often does) lead to conflicts.

There is a misconception in our society that money is the number one cause for relationship problems or divorce. Over the past several years, researchers have shown that this is not true. Money issues do not even make the top five reasons for divorce. (By the way, the top five reasons for divorce are lack of compatibility/commitment, too much arguing, communication problems, infidelity, and marrying too young. I did find two studies that indicated money as the leading cause of stress and divorce in relationships, but both studies were conducted by banks – Citibank and SunTrust Bank.  Go figure.)

So if couples don’t break up over money, then where does the misconception come from? The answer is that most couples fight over money. Couples don’t actually separate because of money issues. They separate from issues that money shines a bright spotlight upon (no communication, incompatible habits, secrecy, etc.)  Money shines a spotlight on some of the following things (in no particular order):

I’m not usually a fan of black-and-white, dichotomous thinking. However, when it comes to money, the truth is that most people really are predominantly either savers or spenders. From this position of being either a saver or a spender, all other money-related issues arise.

The key point to understand here is that we carry all of our unresolved baggage with us into our relationships and these issues manifest themselves in odd ways. This is true of the baggage we bring related to money, sex, work, religion, family dynamics, kids, and gender roles and expectations. When it comes to money, the ideal scenario is to know exactly what your financial beliefs and values are before entering into a relationship. Are you more of a saver or a spender? Do you believe in paying your bills first or paying yourself first or paying for your future first? Do you view money as easy to make or difficult to find? What types of messages (explicit and implied) did you receive about money from your family during your childhood? What financial lessons have you learned along the way?

The largest money problem in a relationship is not the lack of money. It’s your hidden beliefs about money that are suddenly dragged out of you by your partner’s behaviors. Unresolved money issues are like your unresolved hang-ups about sex, religion, family, and everything else you unknowingly bring into relationships; young people are often controlled by the things within them that they’re unaware of.

Think about it. If a man has not fully explored his beliefs about money, then how in the world will he be able to have a decent conversation about those beliefs? This leads to the second money problem in relationships.

So what do you do when you suddenly realize that how you treat money is different than how your partner treats money? For most couples, this is where the fighting begins.

I’m a big believer that all conflicts in the world stem from communication issues. And with all communication problems, the misunderstanding or communication breakdown is always the fault of the sender (not the recipient) of the message. It is always, 100% of the time, the responsibility of the person sending the message to make sure the message is understood perfectly.

A conversation about money is no different. For example, let’s suppose that you’re a saver and your girlfriend is a spender. If she spends too much money on unnecessary frivolous items, you cannot blame her for the spending habits that she developed BEFORE meeting you. If you were to approach her with anger or condescension about the way she’s spending money, how likely is it that she’ll really see your perspective and change her ways? This is especially true if you don’t like the way she’s spending her own money. You’re only going to appear angry and controlling. If she’s spending way too much of your money (or money that belongs to the relationship), it’s still not a good idea to approach with anger and condescension. If you think there’s a problem, and you want things to change, then it’s your responsibility to communicate what you feel needs to happen. The person who’s the saver in the relationship can’t depend on the spender to initiate these conversations.

You say that you’ve already done this with your partner?  Great. Do it again anyway. Ask (and answer) the questions below. I guarantee that there’s a question below that you and your partner have never discussed.